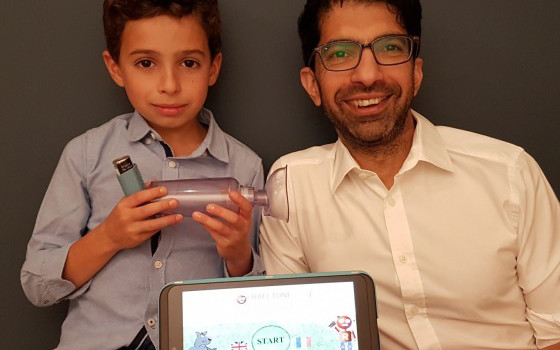 Children with asthma will soon be able to breathe easier thanks to an interactive app created by a University of Manchester spin-out company. The Rafi-tone app, available on i-Phone and Android devices, helps children accept their mask and engage with taking medication by involving them in an onscreen fun animated game.

When a whistle sound is emitted by the mask - signaling that the child is breathing and inhaling medication with a spacer correctly - an onscreen 'Rafi' fights off attacking colourful cartoon-style baddies.

Professor Aslam, a Consultant Ophthalmologist at The University of Manchester and Central Manchester Foundation Trust (CMFT), said his son Rafi's breathing struggles caused a lot of anxiety for both himself and his wife.

"His condition caused a lot of worry for us - we hated to see him suffer," he said. "And to make things worse he hated spacers and would push them away and we were concerned he was not getting the medication. There were tears all round.

"After one particular occasion when Rafi struggled for breath I decided to get straight to work - which involved trying to design and align bits of software, hardware and electronics to his spacer."

He added: "Soon, Rafi was using his spacer while looking at a phone screen which showed simple images when he breathed correctly into the spacer.

"Despite it being in the early hours of the morning, instead of the usual tears and screams he was distracted and engaged with the screen display and took the medication silently and properly. I was amazed to hear him say ‘that was really good daddy, can we do it again in the morning’, before he turned and fell asleep."

It was after that, that Rafi-Tone - which also stands for 'Respiratory Aid For Inhalers' - was born.

Professor Aslam, determined to learn new programming languages to develop and improve the app, produced algorithms to control cartoon characters that reacted when his son Rafi breathed in using his spacer.

He was supported and advised by Clare Murray, a Consultant respiratory paediatrician who helped to set up the initial trials for testing at Royal Manchester Children’s Hospital and ensure the program would give maximum benefit to patients.

Further testing and guidance was provided by paediatrician Shaila Sukthankar and by Margaret Cuffwright, a specialist health visitor in paediatric asthma.

He was also supported by Mark Sanders, Managing Director of Clement Clarke International - a leading respiratory device manufacturer who helped ensure the final arrangement would work with modern devices.

The system evolved through many versions during clinical testing by children at Royal Manchester Children’s Hospital, until the current optimal Rafi-tone app was created.

The Rafi-tone app is University of Manchester spin-out company Clin-E-Cal’s first product. It works in conjunction with the 'Flo-Tone' mask which attaches to the Able Spacer. These are made by Clement Clarke, a company with a long history of producing respiratory devices

Professor Aslam said: "These are exciting times as we expect the Rafi-tone system to be available in September to all children who are prescribed an Able Spacer with small mask.

"There's nothing that would make me happier than to hear about patients using devices or technologies that I've developed and it having a positive impact on them."

Professor Aslam described the crucial support he received from The University of Manchester’s technology transfer office, UMIP, and especially from IP development and partnering manager, Dr Lizzie Crawford, who helped with the development of the product to something that could be delivered to patients in a sustainable way.

Driven by her own experiences with her son and by the positive reactions of patients and carers she is now focused on delivering the potential of the Rafi-tone technology to other groups of respiratory patients.

(CMFT), Innovate UK, UMIP Pathfinder Funding which has helped develop the technology and determine the commercial plans and route to market.

Accenture (NYSE: ACN) has named eight companies as finalists in the Accenture HealthTech Innovation Challenge, which brings together leading-edge startups with prominent health companies to tackle some of North America's...

Researchers Use AI to Predict which COVI…

Researchers at Case Western Reserve University have developed an online tool to help medical staff quickly determine which COVID-19 patients will need help breathing with a ventilator. The tool, developed through...

A study in which machine-learning models were trained to assess over 1 million companies has shown that artificial intelligence (AI) can accurately determine whether a startup ﬁrm will fail or...

Bittium Expands Its Minority Holdings in…

Bittium Biosignals Ltd, a subsidiary of Bittium Corporation, and British ECG service provider, Technomed Limited, have today signed an agreement under which Bittium will purchase a 25 percent stake in...

It isn’t a matter of one needle puncture. Many children coming through the doors of Children's Hospital Los Angeles are seen for chronic conditions and often require frequent visits. Painful...

This topic aims at supporting activities that are enabling or contributing to one or several expected impacts of destination 6 "Maintaining an innovative, sustainable and globally competitive health industry". To...

Through a year-long collaboration with a number of leading healthcare institutions across the globe, Siemens Healthineers has developed the Atellica COVID-19 Severity Algorithm,(1) a model designed to help predict the...

The last thing you want to do when installing a new, free app on your phone is to scroll through pages of information on what kind of access to your...

Nearly two-thirds of thoracic oncologists surveyed indicated they used telehealth tools for the first time during the COVID-19 pandemic, according to a report issued at the IASLC 2021 World Conference...

Addenbrooke's Hospital in Cambridge along with 20 other hospitals from across the world and healthcare technology leader, NVIDIA, have used artificial intelligence (AI) to predict COVID patients' oxygen needs on...

15 - 18 November 2021, Düsseldorf, Germany. The medical technology industry and its suppliers are looking forward to heading to the world's leading industry platforms, MEDICA 2021 and COMPAMED 2021, with...