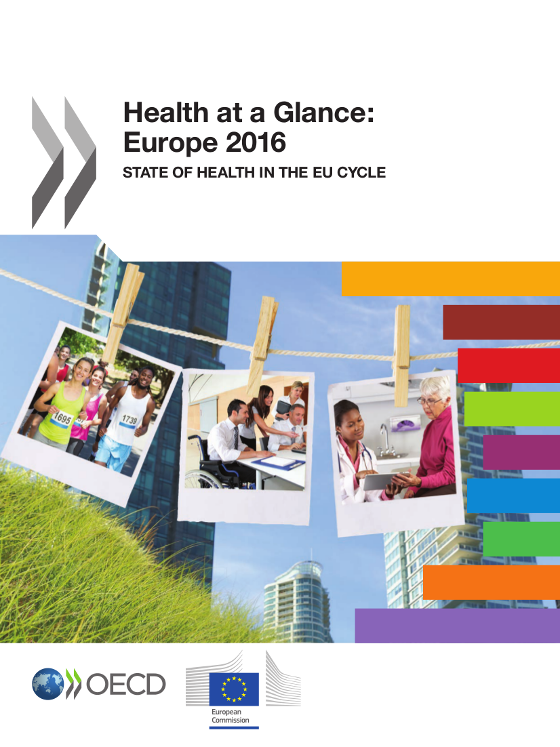 This publication is the result of a close co-operation between the OECD and the European Commission and is the first step in the Commission's "State of Health in the EU" initiative to strengthen country-specific and EU-wide knowledge on health issues. The content, including the selection of key indicators of health and health systems, was agreed upon by the OECD and the Commission, based mainly on the European Core Health Indicators (ECHI), the Joint Assessment Framework on Health, and using the 2014 Commission Communication on effective, accessible and resilient health systems as reference framework. Its preparation was led by the OECD, but the Commission provided support throughout its preparation.

Life expectancy across EU member states has increased by more than six years since 1990, rising from 74.2 years in 1990 to 80.9 years in 2014, yet inequalities persist both across and within countries. People in Western European countries with the highest life expectancy continue to live over eight years longer, on average, than people in Central and Eastern European countries with the lowest life expectancy. Within countries, large inequalities in health and life expectancy also persist between people with higher levels of education and income and the more disadvantaged. This is largely due to different exposure to health risks, but also to disparities in access to high-quality care.

More than 1.2 million people in EU countries died in 2013 from illnesses and injuries that might have been avoided through more effective public health and prevention policies or more timely and effective health care. A wide range of actions are needed to address the many environmental and behavioural risk factors that are leading to premature deaths from diseases such as acute myocardial infarction (heart attack), lung cancer, stroke, alcohol-related deaths and other potentially avoidable deaths. Notable progress has been achieved in reducing tobacco consumption in most EU countries through a mix of public awareness campaigns, regulations and taxation. Yet, more than one in five adults in EU countries continues to smoke every day. It is also important to step up efforts to tackle the harmful use of alcohol and obesity, which are growing public health issues in many EU countries. More than one in five adults in EU countries reported in 2014 heavy alcohol drinking at least once a month. And one in six adults across EU countries was obese in 2014, up from one in nine in 2000.

The quality of care has generally improved in most EU countries, yet disparities persist. Improved treatments for life-threatening conditions such as heart attacks, strokes and several types of cancer have led to higher survival rates, but there is still room in many countries to improve the implementation of best practices in acute care and chronic care.

This new technology partnership kicked off September 1, 2022, marks the first time that Siemens Healthineers is collaborating with a municipal medical service provider to implement a concept it has...

A research consortium led by the UMC Utrecht Brain Center (the Netherlands) in collaboration with Graz University of Technology (Austria), the Wyss Center for Bio and Neuroengineering (Switzerland) and CorTec...

An artificial-intelligence (AI) model built at Mass Eye and Ear was shown to be significantly more accurate than doctors at diagnosing pediatric ear infections in the first head-to-head evaluation of...

Creating the Digital Health Workforce of…

How are trusts and health tech suppliers going to find the people they need to develop deploy and optimise critical clinical information systems in the future? Highland Marketing's advisory board...

Philips Foundation, with its mission to provide access to quality healthcare for 100 million people a year in underserved communities by 2030, together with Philips and RAD-AID International, today announced...

Harvard Medical School scientists and colleagues at Stanford University have developed an artificial intelligence (AI) diagnostic tool that can detect diseases on chest X-rays directly from natural-language descriptions contained in...

Research led by the University of Exeter and Kent and Medway NHS and Social Care Partnership Trust, published in Age and Ageing, assessed a new tool designed to calculate which...

CHOP Study Explores the Use of Telemedic…

Researchers from the Epilepsy Neurogenetics Initiative (ENGIN) at Children's Hospital of Philadelphia (CHOP) found that across nearly 50,000 visits, patients continued to use telemedicine effectively even with the reopening of...

A Smartphone's Camera and Flash could He…

First, pause and take a deep breath. When we breathe in, our lungs fill with oxygen, which is distributed to our red blood cells for transportation throughout our bodies. Our bodies...

Users Trust AI as Much as Humans for Fla…

Social media users may trust artificial intelligence (AI) as much as human editors to flag hate speech and harmful content, according to researchers at Penn State. The researchers said that...